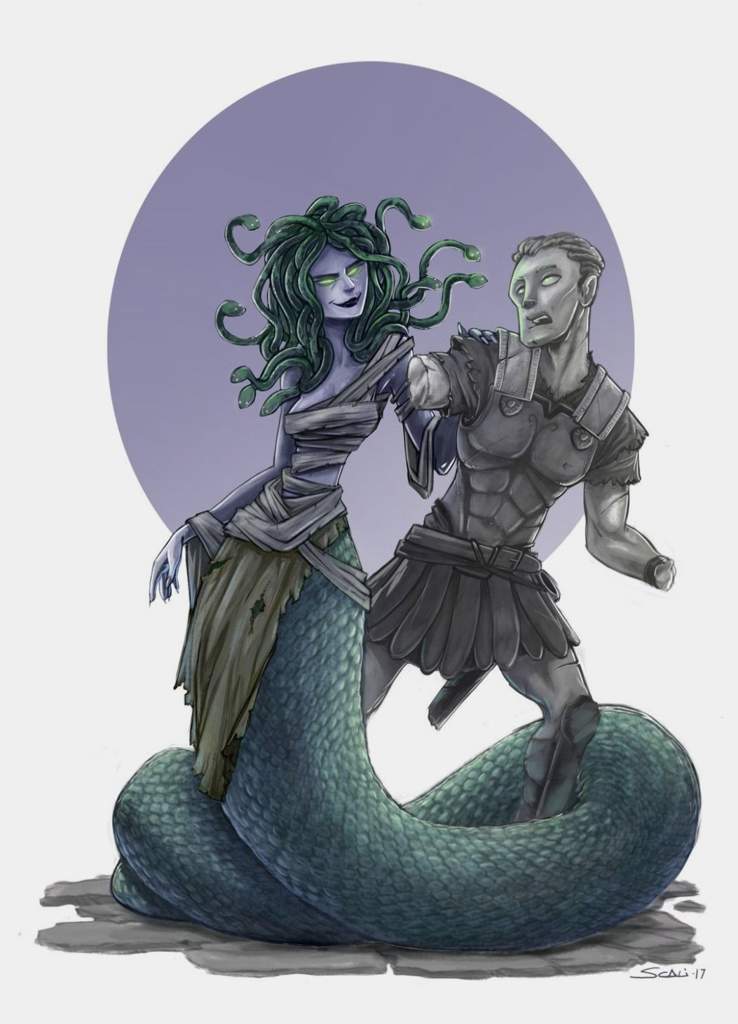 The Greek Myth of Perseus

His goal was to keep her from male suitors so that she could not become pregnant. The myth goes on to say that through the opening in her enclosure, the great God Zeus came to her in a golden rainfall. From that meeting with the very amorous Zeus, Danae did become pregnant and had a child while still imprisoned. That child was the legendary Perseus. Thus, Perseus was known as a demigod, meaning that he was born of both mortal his mother, Danae and immortal his father, Zeus parents. When King Acrisius realized that his daughter had, in fact, had a child, he feared for his life, but was unable to take the lives of his daughter and grandson.

Instead, he responded by locking Danae and Perseus in a wooden chest and casting them out to sea. Perseus and his mother, Danae experienced calm seas after being cast out of Argos. The legends say that Zeus played a role in that by speaking to Poseidon, the God of the sea, so that they may have a calm journey. Eventually, Danae and Perseus washed up onto the shores of the island of Seriphos, an Aegean island. There, they were found by a fisherman called Diktys. He proceeded to help raise Perseus on the island of Seriphos. Perseus spent many years at Seriphos. He was known there as a young man with great physical strength as well as great courage.

Danae stayed there as well. She happened to catch the eye of the brother of Diktys, who was also the King of the island. His name was King Polydectes. The King wished to court Danae, but Perseus did not want that for his mother and he therefore became an obstacle for the king. King Polydectes needed a way to rid himself of Perseus so that he could get to Danae. Perseus was eventually overheard boasting about his physical strength, saying that he could single-handedly kill the dreaded Gorgon Medusa.

This was the opportunity that King Polydectes was looking for. He presented a challenge to Perseus that if he could not make good on his boast to kill Medusa, then the King would take possession of his mother. Medusa was one of the three Gorgons, sisters who were known for their hair made of venomous snakes and who could turn men to stone with just a single look. Medusa was the only one of the Gorgons who was mortal meaning that she could be killed.

Perseus first consulted the Gods, who advised him to seek out the Graiai. The Graiai were actually 3 other sisters of the Gorgons. The myth states that the Graiai were three old witches who had only one tooth and one eye between them. Perseus was said to have stolen the eye and would only return it for information on finding Medusa and also information on finding the cap of Hades a cap that made the person invisible when he wore it as well as winged sandals to enable him to fly. He also asked for the kibisis, a special bag that he would use to carry the head of Medusa. In order to get their eye back, the Graiai gave in and helped Perseus to find the items he asked for. With those items as well as a sickle given to him by the God Hermes , Perseus was on his way to attempt to slay Medusa.

Perseus was completely armed and ready to go look for the gorgons. On his way, he found many stone statues. Interestingly, they were the bodies of those who had visited the place and looked at Medusa in the face. He knew he had to be cautious, so he decided to wait for the right moment. That way, he could avoid looking her in the face. Once she appeared, he grabbed his sickle and cut off her head with a single cut. The horse Pegasus and the giant Crisaor came out of her body.

They were the children she was gestating. He put it in the saddlebag he carried and, thanks to it, he was able to face monsters and enemies. It allows us to look at horror in the eye, yet, at the same time, it prevents it from paralyzing us. This, as well, can be seen in a symbolic manner. Daedalus is most famous for building the Minotaur's labyrinth, but he's also the protagonist of many other ancient Greek tales thanks to his talent Hoys, A. Culture Art and Psychology. The Myth of Medusa and Perseus 4 minutes.

The myth of Medusa and Perseus put a series of very interesting symbols into play. Medusa represents a woman cornered by the feminine power and Perseus is the symbol of a person who manages to overcome fear by projecting it in a mirror. Fearing that this prophecy would come true, he locks his only daughter, Danae, into an underground bronze chamber, to keep her away from all men. However, Zeus the all mighty saw the girl and fell in love with her. He then took the form of a golden rain to get into the bronze chamber and seduce Danae. From this union, Danae gave birth to a son whom she named Perseus. When king Acrisius heard the baby crying and realized he had a grandson, his first thought was to kill the unfortunate boy and his mother.

But he couldn't do as he feared he would cause the anger of Zeus. So he cast his daughter and grandson into a wooden chest and set them into the wild sea to get drowned. However, Zeus saw the desperate woman and asked Poseidon to calm the sea water. Indeed, the sea calmed down and after a few days, Danae and his new-born son landed on the island of Serifos. There Dictys, a fisherman and brother of the island's king, found them and took them to his home, where they would be safe. Perseus grew up into a fine young man under the care of the kind fisherman Dictys. In the meanwhile, King Polydectes began to be inflamed by passion for Danae, who was still a charming lady although many years had passed since her youth.

Danae, however, did not wish this marriage. So he decided to set up a plan to get rid of this annoying youth. He challenged Perseus to dare a difficult task, to kill the fearsome Gorgon Medusa and bring back her head. Gorgon Medousa was a terrible monster with snakes in her head and she could turn into stone everyone that looked her face. By killing Medousa, Perseus would prove his braveness, as fits to the son of Zeus. Polydectes was sure that Perseus would not survive this dangerous task. What Polydectes had not known was that Perseus was beloved by the gods. To help him, god Hermes gave him a curved sword and a pair of winged sandals other versions of the myth say that Hermes did not give Perseus a pair of winged sandals but a white winged horse while Athena gave him a mirror of polished bronze and a cap from Hades that could make invisible anyone who would wear it.

With these divine aids, Perseus started his long journey to the cave of Medousa, somewhere in Africa. He indeed found lying in her deep cave. Since he was wearing the winged sandals, he could fly around her and since he was wearing the magical cap of Hades, he was invisible. In order to avoid looking Medousa directly to her face and thereby being turned into a stone, Perseus approached Medousa looking at her reflection in the mirror and cut off her head with the sword of Hermes.

So easily then, the brave and intelligent Perseus managed to complete this difficult task! As he was flying over Africa in his return home, Perseus encountered Atlas the Titan, a mythical giant, who challenged him. In their confrontation, Perseus used Medousa's head to turn the Titan into stone. Perseus continued his journey home and, as he passed the kingdom of Ethiopia, he came upon the beautiful and helpless maiden Andromeda, chained to the rocks waiting to be devoured by a sea monster.